A Man of Passion for Himalaya and Its People 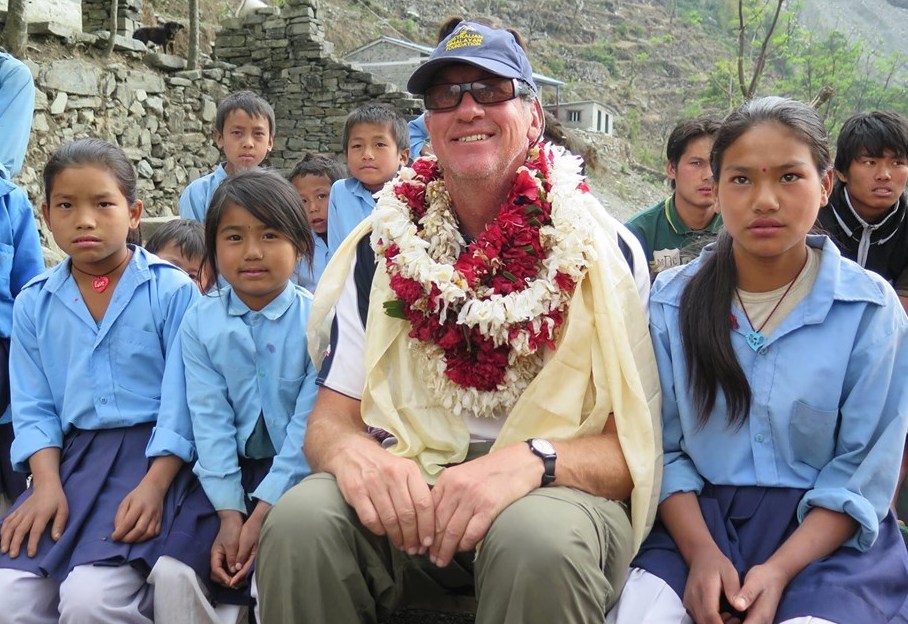 Simon Balderstone AM, a committed social campaigner, has been serving as the Chairman of Australian Himalayan Foundation (AHF). He shows joyful satisfaction in the activities related to Himalaya and community work.

At present, this charity organisation is dedicated to campaigning with the priority on humanitarian relief to help the noble cause ‘Help Himalayan families as COVID-19 Unfolds’. The AHF “gives what is needed most to those who need it most” to the children, families, and communities of the Himalaya.

The experienced trek guide has fond memory of how he became a Himalayan trek guide, a member of the 1984 Everest Expedition, and then a co-founder and the Chairman of the AHF, as he was born in a very flat “outback” part of Australia – a flat country surrounded by sea. But from a very early age, he was fascinated by mountains. One of the first “grown-up” books he ever read was “Ascent of Everest”, Sir John Hunt’s account of the successful 1953 British Everest Expedition. It may have been because mountains were something very different to what he was experiencing as a child, and had a certain mystique and excitement factor, but it was probably more because he always loved being outdoors.

He grew up on a farm and in nature, and that led to bushwalking, then, being adventurous, trekking in the Himalaya, then being a trekking guide there, and through trek guiding friends, being a member of the successful 1984 First Australian Everest Expedition.  Also, importantly, he grew up being aware of and inspired by the amazing education and health work Sir Edmund Hillary was doing in the Himalaya following his “first ascent “, and that drew him to the mountains too.

As a journalist, he first met Sir Edmund, and then as a guide, with mutual friends, he met and became friends with his son Peter. Many years later, still inspired by the work of Sir Edmund and also their love of the people of the Himalaya, a group of their trekking and climbing friends, including Peter, formed the AHF, in 2002, to carry on and expand Sir Ed’s legacy. So mountains – particularly, the Himalaya – have always been special to him, and so have the people who live there, and Sir Edmund, his legacy, and the greatest of all mountains, sit at the core of the Australian Himalayan Foundation’s formation, work and heritage.

There is a special bond and connection between many Australians and Nepal and the Australian Himalayan Foundation gets great support from the Australian community to fund its work.

It was a magnificent experience for him being a member of the 1984 First Australian Everest Expedition not only for the lifelong bonds and friendships formed (which later became a big part of the formation of the Foundation) but also for the amazing good fortune of being on that great mountain, out in pure nature and pristine wilderness, engaged in an exhilarating experience.

He felt that it was sometimes challenging, but that was not unexpected, as it is in everyone’s obvious knowledge that the forces of nature are much more powerful than human beings, and that the mountain – Mother Goddess of the Earth – is definitely in charge!  In general, he finds mountains extremely blissful – though he is never a real mountaineer. 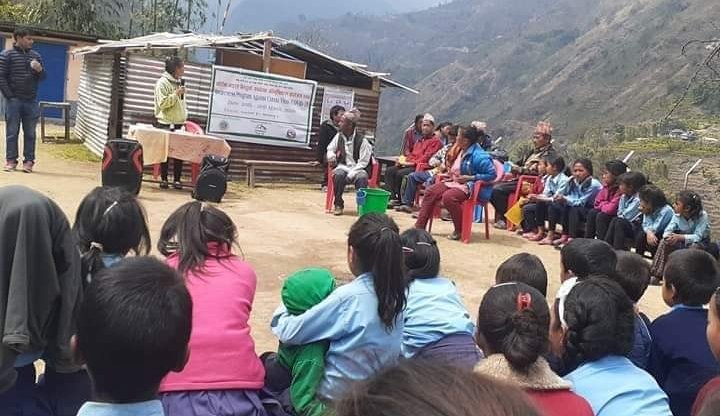 He ardently believes that it is sometimes challenging but in a rewarding way. He looked back at even the most challenging times with great satisfaction (e.g. when he broke his back on a trek in the Lower Solu Khumbu, but walked for another five days,  with a group of Foundation supporters, “cutting the ribbons” on some of the 85 classrooms the AHF had built after the 2015 earthquakes). And to be high on a mountain, in pure nature, is also always a great joy.

He still goes to the Himalaya most years – often with Peter Hillary – taking Foundation supporters on unique “customised” trips to raise money for the AHF work and, importantly, for the supporters to see first-hand their programs and the outcomes their donations achieve.

Involving in the Missionary Works after Conquering Mt. Everest

In 2002, Simon’s group, friends who had lived, worked and ‘played’ for  months and months in the Himalayas over several decades, formed the Australian Himalayan Foundation, to give something back – to make a difference, helping the people of the Himalaya have better futures, and more work and life opportunities, through improved schooling and health services and a better environment.

The co-founders were Garry Weare, Peter Hillary, Lincoln Hall, Mike Dillon, Christine Gee, Mark O’Toole, and Simon himself. Organised by Garry and Peter, they were inspired to form the Foundation by the amazing, ground-breaking humanitarian work of Sir Ed, and their love of the people. They were passionate about carrying on and expanding Simon’s efforts and legacy, and still are – and now they have a set of practical, cost-effective programs in Nepal, Bhutan, and northern India. 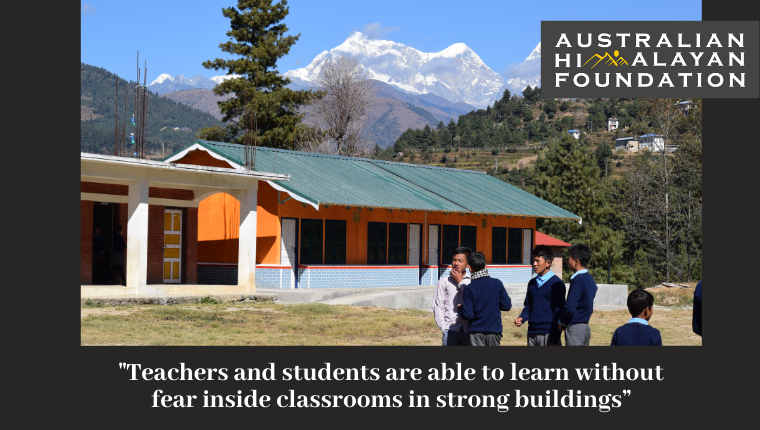 Their flagship program, the “Teacher Training and Quality Education” program is largely modeled on the work of Sir Ed. It provides,  through REED –  their in-country program partner in Nepal –  teacher training, scholarships for disadvantaged children, and resources for schools, in the very poor Lower Solu Khumbu region– where their Nepal  programs are centred, and are making a major difference in improving the education of thousands of children, especially ‘girlsmission’ is to improve the quality of life of the people most in need in remote areas of the Himalaya.

Their work in partnership with the people of the Himalaya to help the most disadvantaged meet their priority needs through integrated improvements in education, health and environment. At the moment, in this time of COVID-19, they are striving hard, with REED,  to have the much-needed education of thousands of children in the Lower Solu Khumbu continue (including through “distance learning”) and lessen the effects of COVID-19.

Certainly thousands of Australians every year love going to Nepal and – nothing beats being there for real appreciation  “lock-in”  that place in the heart for Nepal, the Himalaya, and Nepalese.

The Significance of the Himalayas for Seasiders

Nepal and the Himalaya seem to have always had a special place in the heart of many Australians, whether they live by the sea or in the bush.

May be it is that the mountains hold a special mystique for them, and inspire them,  and certainly thousands of Australians every year love going to Nepal and – nothing beats being there for real appreciation  “lock in”  that place in the heart for Nepal, the Himalaya, and Nepalese. And there is inspiration and excitement created by the heroic deeds of climbers, including many Australian mountaineers.

Whatever the reason, there is a special bond and connection between many Australians and Nepal – and the AHF gets great support from the Australian community to fund its work.

Actually Climate Change is already having a significant effect in the Himalaya, with changes in temperature, glaciers, snowfall and rainfall affecting Himalayan communities and, because of the huge importance of the Himalaya as the source for many major river systems, also affecting major parts of Asia.

The receding of glaciers is a major problem in mountains across the world, and Climate Change adaptation is going to be vital for communities in the Himalaya. There are specific effects of climate change – such as GLOFs – Glacial Lake Outburst Floods – which have already devastated several Himalayan communities. And many communities will also have to adapt to changes in level and timing of water supply. The AHF has begun a “Environmental Youth Climate Initiative” in Nepal and is hoping to develop a Climate Change adaptation program across the Himalaya in the near future.

He hopefully thinks that adventure tourism and mountain climbing will return quickly, making a rapid and full recovery. The big effect of COVID-19 on these areas has been the huge loss to business and personal incomes, through “lock-downs” and the lack of tourists.

So, he hopes that these areas are able to be safely opened up as soon as possible, so people’s livelihoods and local businesses can recover and get back up and running.  But this will depend a lot on the timing and level of incidence of COVID-19 in mountain areas. 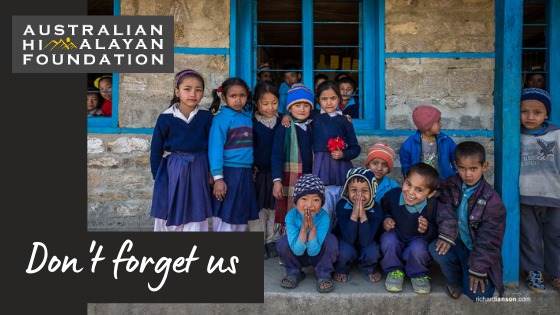 There is a large and wonderful Nepalese diaspora in Australia (including more than 50,000 Nepalese students studying in Australia), and Simon and other AHF Directors have many close personal connections with that community, and they attend and speak at many functions held by the community.

But they (the AHF) aim to develop a much stronger relationship with the Nepalese community in Australia , through partnerships and arrangements with Nepalese organisations in Australia, and hope to maximise their support for the people of the Himalaya through that.  Of course, AHF Director, the esteemed Nepalese-Australian Amit Thapa, has a very close relationship with many Nepalese in Australia, and Amit Thapa will be helping them to forge very close ties with them and the many Nepalese-Australian organisations.