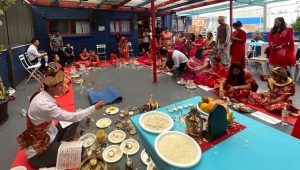 Sydney, ‘Guthi Australia’ a Sydney-based pioneering social organization,has successfully completed ‘4th Samuhik Ehee’ on 19 December 2020 in Sydney, Australia. This is the first event organised after the formation of new executive committee under the leadership of the current President Anup Man Maharjan. There were altogether 8 Ehee participants who were accompanied by their families. Gurju Karun Bajracharya performed this ritual as per culture and tradition of Newah community. Team Guthi Australia along with Gurju (Newah priest) played a significant role to execute this event successfully.

Pre-adolescent girls from the Newah community are married thrice. Generally, in their early girlhoodin odd years, they are first symbolically married to Bya, a fruit, also known as wood apple regarded as a symbol of Lord Vishnu. This typical ritual is known as Ehee or Ihi. It is followed by Bahra where girls are married to Lord Sun. It is performed before the girl’s period begins. Finally, they get married to a man.

It is also believed that if the girl’s husband dies later in her life, she is not considered a widow because she is married to Lord Vishnu and Sun known as divine marriages during Ehee and Bahra ceremonies.

The Guthi Australia President shared, “We’re planning to organise Samuhik Ehi (Collective Ehi) next year too and will be expanding the event to other states such as Victoria and Queensland as the Newah community is growing in these states. This traditional ritual is quite crucial in our community and will help to bridge the gap in between the change of culture here in Australia and keep us within our roots.”

He further said, “As the Newah community in Australia is growing day by day it has been very important to keep our traditional values and the essence alive. Guthi Australia has been taking great initiatives to support and organise events and programmes to address these needs of our growing community.” 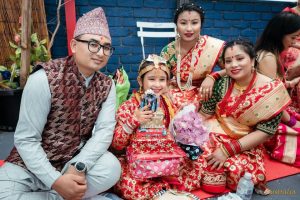 The founder of Guthi Australia, Padam Shakyaviewed, “With every passing event, Guthi Australia is earning higher level of good-will and confidence of the ethnic group concerned. Even after leaving the homeland for decades, the community members are admirably celebrating the cultural traditions. We have been celebrating the beautiful cultural traditions of the Newah community in this great country where every ethnic group’s culture is held in fairly high esteem. We are also proud to introduce the distinguished variety and richness of our community to other communities.”

Shiva Shrestha the outgoing President observed, “We are very happy to see the Newah community’s culturally spellbinding celebrations extended beyond the border of the country. Many great countries are largely populated by immigrants with rich cultural heritage and native identity. We are very proud to continue to celebrate diverse culture in Nepalese community in Australia.”

The one stalwart supporter of Guthi Australia and community campaigner Shyam Sainju viewed, “Culture, a foundation or keystone of any community, is the finest expression of what it means to be human. We must make every effort to educate the coming generations the proud values and uniqueness of their forefathers’ tradition and culture. We should continue to promoteNewah community’s cultural heritage in Australia that has sacred commitment to the values of multiculturalism.”