Gurkha Nepalese Community (GNC) is all set to hold the closing ceremony of 22nd GNC, Oli & Associates (Migration, Education & Accounting) Football Competition 2020/21 on 28th of March 2021 atNorford Park, 4A-16A Boundary Rd, Chester Hill, NSW. In the award distribution ceremonyGNC, arguably the organiser of  the biggest soccer event in Nepalese Australian community for that matter the Nepalese diaspora,is going to acknowledge the efforts of volunteers and players who have shown their exceptional dedication and sportsmanship during the 22nd Annual Football League Competition. 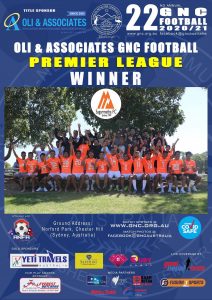 After the ending of all the matches in this season, Sagarmatha FCtopped the Premier League standing with 26 points from 11 games and St. George Nepalese Club stood second with 25 points in the overall league standing followed by Beni FC with 25 points and The Rising Gurkhas FC with 23 points respectively. The top four teams were qualified for the GNC Vet Football Shield 2021.

In Minor League,FC Danphetopped the league standing with 23 points from 9 games and Fewa FC stood second with 18 points in the overall league standings followed by Auburn Nepalese FC with 16 points. The three top ranked teams are promoted to the Premier League of upcoming 23rd edition of GNC football competition.The rankings from number 4 to 10 are as follows:Himalayan Youth Club, Hornsby FC, Parra Park FC, Sydney Nepalese FC, Club Nepal, St. George Friends FC and Gurkhas United FC. Three teams with the lowest points in the Minor League  will get relegated. 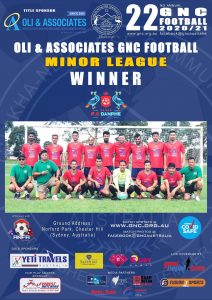 In the Premier League category, the four teams which gained top four positions in the Premier Leagueplayed in the semi-final matches on 14 March. The Rising Gurkhas FC outscored the league champion Sagarmatha FC (3-2) and with the same score-line (3-2) St. George Nepalese Club won over the defending champion Beni FC. The two top-flight teams of Nepalese Australian community The Rising Gurkhas FC and Saint George Nepalese Club will be competing in the title match.

In the semi-final of veteran’s category, the league leader of this season and the defending champion Parra Park FC trounced Laligurans FC 5-0 to set the date for the title match with the defending league champion MFC which defeated SGFFC(2-1).

In both categories, there will be third place matchesbetween the teams defeated in the semis.

The renowned veteran footballer and the coach of Saint George Nepalese club Tom Thapa viewed, “Our in-form young boys have been playing like a unit throughout the season. Their performance has been consistently impressive. The forwards are creating very impactful ripples. The well-balanced team defeated one highly competent team and hot contender of the league, The Rising Gurkhas FC in the league stage. So, they are confident of winning the title once again outscoring their opponent, The Rising Gurkhas FC.”

The well-known footballerand award-winning coach of The Rising Gurkhas FC Roshan Bikram Shahi shared withNepaleseAustralian.com , “We are very thankful to GNC for organising the remarkable tournament with consistently impressive performance and delivery. It has offered the appropriate sporting platform for the players belonging to different age groups of Nepalese origin and created inspiring environment to exercise the natural sense of competition. We are obviously excited to play in the final against a very competent and reputed Football club in our community. As we defeated the league champion Sagarmatha FC in the semi-final we are very confident to do better in the decider.”

He continued, “GNC has done absolutely awesome job organising this tournament for the last 22 years. No words are enough to thank to the pioneering organiser’s great work. The amazing team members have done this praiseworthy and inspiring work every year for more than two decades. But GNC also needs to realise that the competition has been tough in recent years. There are so many players, who have had the first-hand experience of the high-level games in Nepal and involved in different clubs,are participating in GNC. So, the knowledgeable players expect fair and better decisions from the referees. We have seen couple of inexperienced people who run the games and the decision they make are unacceptable.”

He further expressed, “We hope, keeping this in mind, GNC Management team will recruit more experienced referees in the 23rdGNC tournament next season. We will have a cracking final on Sunday. St. George Nepalese Club has been one of the most consistent teams during the league. They have some great players who have higher level of experience in Nepali league back home. We expect a fair game and hope thatthe better side win that day.”

GNC President Jit Man Limbu shared, “GNC always values sportsmanship and healthy competition for the comprehensive development of our football culture. We would like to thank all football fraternity and community members who have been positively contributing to the overall success of one oldest and longest running and prestigious soccer tournament in our community.”

Tanka Gurung, theformer President of GNC said, “We thankfully acknowledgeall the respected and valued stakeholders of soccer and the community members who have been reliably and responsibly cooperating with GNC to make GNC football campaign successful as in its other missions.”

TheNRNA, Australia, VP and NSW state Coordinatorand past GNC VP, Dev Gurung put, “GNC League, one most revered and inspiring sport event in our community,has been running annually for last 22 years.It always feels great to see all teams making most of the available opportunity.GNC is sincerely devoted to continue to consistently deliver social excellence through sports mainly football”

ANFA President Bijen Batajooexpressed, “We would like to thank GNC for the successful organisation of this year’s edition and all stakeholders who have supported our great football campaign. ANFA always intend to make positive contributions to assist GNC to achieve its noble aim. Team ANFA would like to congratulate SFC being GNC Premier League champion and FCDanphe, being GNC Minor League champion in this season and Parra Park FC being the champion in the Vet’s category. We are truly appreciative of GNC for keep the competition going in the face of COVIC 19 and maintaining the protocol and we would like to thank you all stakeholders including the sponsors, clubs, ANFA volunteers, media,” etc.

The long-standing respected GNC advisor and the pioneering community leader Padam Shakya viewed, “Football league in any country or community is a national pride and cultural asset. The keystone for other tournaments has been a pinnacle of paramount importance. It offers appropriate biggest stage and highest profile to the participating teams who have tested and proven standard. It is very heartening to see all the valuable stakeholders of soccer and ANFA the highest body of football body are supporting team GNC through collaborative effort aiming to put it on the pathway of professionalism and excellence.”

The NRNA, ICC, Sports Academy member, leading entrepreneur and senior footballer BhupalSitoula remarked, “The beauty of league is that all teams have chances to play against the teams of any status and strength and even the teams who survived the last year’s relegation want to prove themselves by matching with the strength of the leading teams and even the defending champions and sometimes even emerge as the giant killers.I’d like to thank the incredible organiser GNC, ANFA and all involved in this glorious event. I also would like to extend best wishes to all teams playing on the grand finale.”