Team Nepal XI in Down Under

In the past few months, the former Nepal A division players with the professional experience have formed a new football team ‘Nepal XI’ in Sydney. They are all set to make a huge comeback in Australia to share their past glorious footballing experience with all associated with football in Australia. 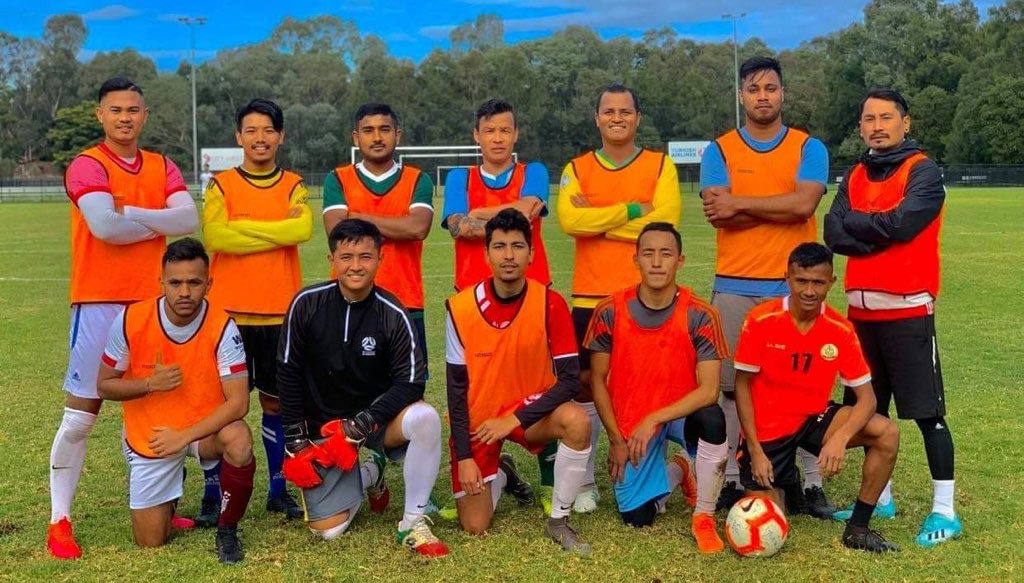 There is a close correlation between sport and a healthy society. Sports have been an integral part of man’s everyday life since people learned to live in a community. They teach the spirit of fair play and good sportsmanship which has monumental value and inspiring quality required to be successful in any walk of life. Team sports teach people the values of interactive skills, friendship, mutual cooperation, responsibility, teamwork, etc. It is also the best medium to expand social contacts.

Sport is a source of national pride for that matter every community. Nepalese whether in the homeland or abroad pride themselves on the high level of sporting delivery, sports culture, and sportsmanship. Meritoriously promising sports activities provide an excellent transition from ordinary to greatness to our sports culture and will be of practical benefit to all concerned. All those organizations and individuals who have been excellently playing a pivotal role in community unity, progress, and harmony through sports are worthy of praise, honor, and gratitude.

Football, popularly known as soccer in Australia, is far and away the most played sport in the world and most favorite sporting pastime. Arguably, it is the biggest crowd-puller or spectator sport with which more than 4 billion people including the avid fans are associated. It is a global phenomenon acclaimed by both the mass and class alike. Football is a number 1 game or has the status of a national sport in nearly 100 countries. In Nepal, too it is one best-loved sport. Outside Nepal, Australia is the country where the greatest numbers of Nepalese teams play football in an organized way.

Former Nepal A Division Footballers Reassembled in Australia with a Mission

In the past few months, the former Nepal A division players with the professional experience have formed a new football team ‘Nepal XI’ in Sydney. They are all set to make a huge comeback in Australia to share their past glorious footballing experience with all associated with football in Australia.

The boys most of who were teammates back in Nepal seem to be sincerely excited to unite themselves to the characters of the like-mindedness all in the best interest of our community soccer and beyond. The newly formed team is making significant efforts to unite the footballers of Homeland in Australia and integrate with the Sydney based award-winning Nepalese footballers.

Sunil Lama, the Team Manager of Nepal XI, who also played for Armed Police Forces Club (APF) shared, “Our new club is the first of its own kind in anywhere outside Nepal. The boys made a name for themselves and earned a reputation for the clubs they played for and served the national landscape of football rallying around all levels of football campaigns in Nepal and they want to carry forward the spirit here too. We mean to work with all who deserve special thanks for passionately promoting our beloved sport overseas.

We kick-started warm-up sessions from early May when the restrictions were eased and we followed the government regulations. We footballers with the professional level experience in Nepal aim to promote football fraternity in the line of the proud football culture established by the acclaimed pioneers. We also would like to make the collective efforts to help the newly arrived football friends from Nepal to involve in the football clubs and cooperate with one another with shared beliefs. We must not complain about the problem, but help to put it right. It was a promising sign that these inspiring activities could be built on for the future of our soccer culture. We are heartily thankful to all pioneering organizers and all other organizers of football and sincerely devoted to continuing to consistently deliver social excellence through sports mainly football, the universally acknowledged as the mother of all games.”

Suman Khadka, the Team Captain of Nepal XI was the former ANFA academy player who represented Nepal in the Under 14,16,19 age group and played for the top-flight A Division football team of Nepal, Rani Pokhari Team (RCT). He remarked, “We are very proud to regroup in Australia and form a team including the highly promising and passionate football players and we are determined to live up to the expectations of our established soccer culture in Sydney and we would do our best to upgrade the level of soccer in our community.

We also would like to reach out to the wider picture including the footballers of the second generation of our community and we also have a plan to start an organized football academy for the kids. We are making sincere efforts to deliver good performances be in the training and the championship promoting the football fraternity and native friendship. We are thankful for the opportunities and quality physical facilities that will enrich our new phase of footballing experience in coordination with all football fraternity celebrating the bond of brotherhood.”

Man Dangi, who played for the leading A Division clubs of Nepal such as Three Star Club, Machhindra Football Club, Friends Club, Armed Police Forces Club (APF), viewed, “As one founder of Nepal XI, I would like to commit that our team intends to bring honor or credit to our football landscape and appeal all the stakeholders of football to work together for the upliftment of our rich football culture rising above all differences as football is our common ground. In Nepal, we started playing football together from our childhood and most of the players played for the same club in Nepal and gained vital experience.

Destiny has landed all of us in Australia the most promising land for the Nepalese footballers to start the second inning and share their bonding with the footballers of Nepal and the new Nepalese football friends in Australia. We have been blessed to celebrate our native bonding in the foreign land as well. We would like to take this opportunity to devote ourselves here too to the best of our knowledge, ability, experience, and resources in the highest welfare of the proud football culture in our community which our predecessors, senior players and pathfinders of football have excellently founded and put in the right direction. We have been amazed by the core to experience a fabulous football fraternity in Sydney. We mean to take the team spirit and brotherly bonding to another level. Like other distinguished footballing elements, we are also determined to bring about positive change in the existing soccer landscape devoting ourselves with limited resources which we believe will be much upgraded and added for professional excellence. Here we take up football in our spare time, but we mean to maximize everyone’s performance to achieve the common goal.”

Another vital player of the team is Shiba Ram Giri who was the former ANFA Academy player and APF player. He floated his view, “Soccer teaches us how to thrive under the pressure and make the incredible breakthrough. It has consolidated our group spirit and collective efforts to achieve our common goal. Sport should be always on the high agenda of the youth as it helps all to acquire a healthy lifestyle and football unifies our community as the people belonging to different stations of life are involved in it. We are always committed to strengthening our community harmony through sporting excellence. Soccer and activities related to soccer delight us to the core.

We’ve always tried to paint the picture of the community in which all people happily and proudly play football as sport binds all into one healthy whole. We want to pave the way for the youngsters who aspire to inspire the community through soccer along with pursuing and excelling in their chosen career. We would like to continue to play a distinctive brand of football and deliver consistently in a meaningful and purposeful way. All the respected organizers and football teams in our community have been making distinguished efforts to continue to conquer meaningful horizons and winning accolades.”

Building the future together; shaping the soccer scene

The well-known veteran footballer and one pioneering sports contributor in our community Bhupal Sitoula, the outgoing NRNA, ICC, Sports Coordinator, Oceania expressed, “The boys have distinguished themselves in Nepal as the national level players and they want to excel in their footballing experience here too in our football-crazy Australian Nepalese community in their own right and improve the overall standard of football working collaboratively with all the stakeholders of football.

Great players raise the profile of any tournament and their spectacular performance illuminates and raises the significance and standard of all championships and even in the training session, their inspiring attitude is a key. It is always heartening to see the self-inspired and well-meaning teams stepping forward to give the incredible facelift to our sports culture. We hope that they would build on their talents and purposeful enterprise to weave the proud story together for the golden future of the beloved sport.”