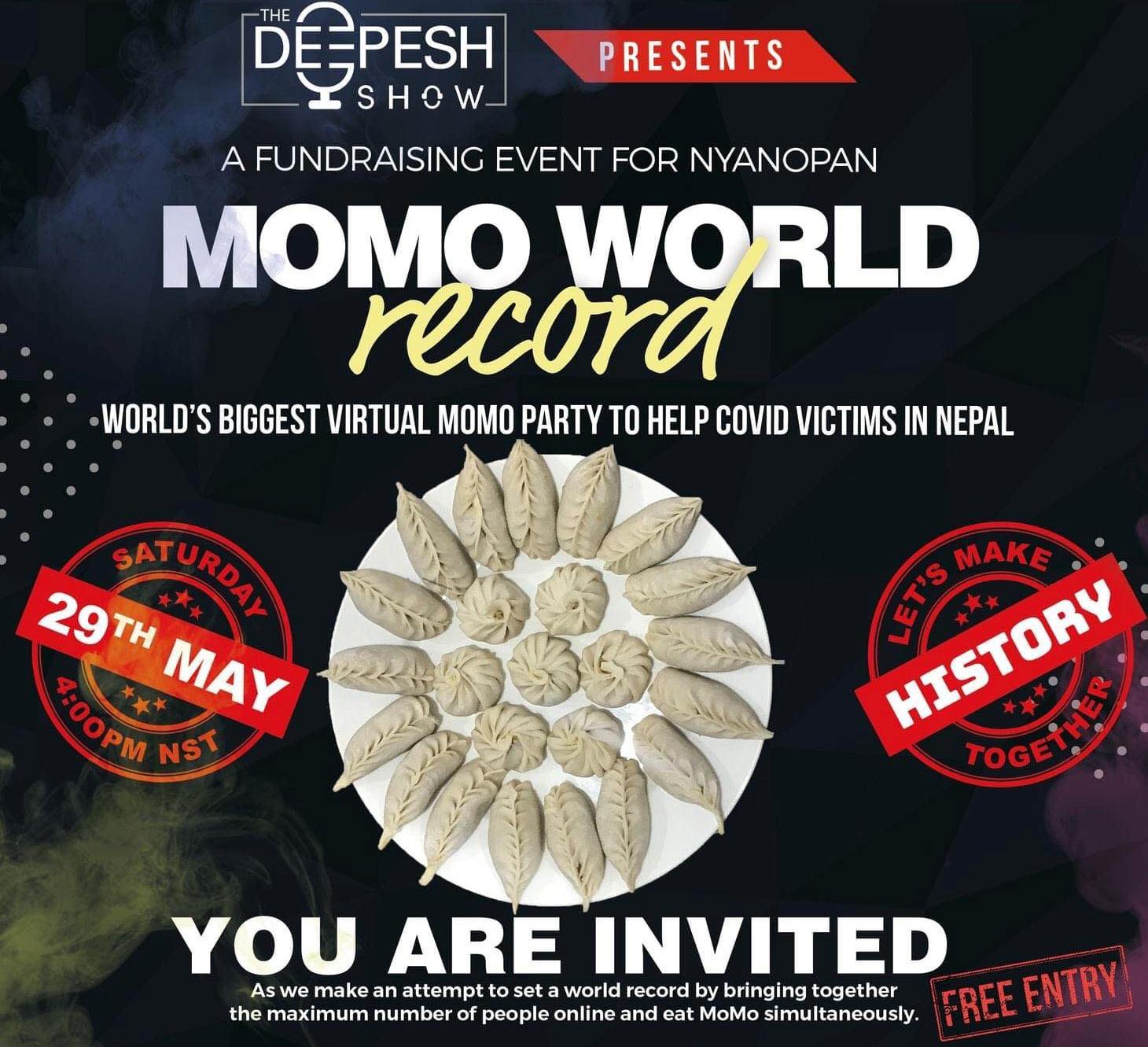 April Fools’Day is widely known for the creation of humour and sharing banters with friends. However, this year’s story is different and positive.

An idea of charity, social service and volunteerism emerged following a post targeted for humour. A question was asked by Deepesh Shrestha to engage his followers in his Facebook page “the deepesh show” which has around 101k followers: “Will you participate if there is Mo: Mo eating competition to set a Guinness World Record?”

Deepesh is a renowned radio presenter of Nepal and regularly posts engaging content on his Facebook page to interact with his followers. He has devoted more than two decades to Nepalese media before he migrated to Australia. While in Nepal, he ran popular radio shows and events. He is widely respected for his contribution to Nepalese media.

At present, his show, “the deepesh show” goes live every Sunday from Deepesh’s home studio in Marsden Park, Sydney. He started this show around March 2020 to create a positive impact when Covid was hugely affecting lives around the world. He wondered, “Why not start a show and cheer people up?”

Once posted, the question about Mo: Mo: on April Fools’ Day 2021, Deepesh was overwhelmed with people’s responses. Probably, he thought that was what meant to be a viral. Text messages were bombarded in his mobile, the Facebook messenger had huge queries, followers were commenting repeatedly supporting his post, and his mobile was continuously ringing.

Mo: Mo: is the Nepalese version of a dumpling, one of the most popular foods enjoyed by Nepalese in Nepal and worldwide. Its popularity is growing globally amongst various nationalities. This food when cooked at home is made by joint efforts of family members and provides all a perfect chance to unite, bond, and shared camaraderie.

People’s reaction to how his question was perceived made Deepesh seriously think about this event. He started to further brainstorm and research the practicality of the event. Deepesh discovered approximately 130 people had secured Guinness World Records eating fish and chips online in 2020. The next daunting task for Deepesh was to find some helping hands as he knew he needed some like-minded people to support him because a campaign of this scale would need hours of volunteerism and sacrifice.
He approached a lot of friends living in Sydney. Many denied volunteerism. However, two friends gave the green signal.  First, Rahindra Shrestha a successful entrepreneur and TV presenter of Everest TV, and finally, Ashish Raj Acharya who is always open to new ideas and a long-time friend of Deepesh.

The renowned entrepreneur and passionate Mo: Mo: lover Rahindra responsively and curiously shared with Deepesh, “If thousands of people are inquiring about your post, it is a lovely idea, let us find out more, and I am happy to help you in your campaign.”  Rahindra having huge organisation management experience and skills and great trust from his network, when he approached business houses for sponsorship, he received huge support which convincingly complemented this campaign.

The well-known youth campaigner and passionate Mo: Mo: lover Ashish mentioned, “Please count me in. Though achieving Guinness aim is not guaranteed, it is worth the try. We should add some other elements in this attempt, maybe a social cause. As a disclaimer, I’d like to assert that if we try Guinness World Records, who knows computer may get hacked, the server may disrupt, the internet may freeze, the computer may crash, and so forth. If we invite so many people to come online to eat Mo: Mo: to attempt a record, let us target two things Mo: Mo: record and a charity so that at least one is achieved, if both are achieved, that is the ideal outcome.”

The team researched charitable organizations that would be the recipient of funds collected via corporate socially responsible business sponsorship and individual’s selfless donation. They selected “Nyanopan” as the recipient after the vigorous screening. They wanted to ensure an ethical charity gets these funds to help covid victims as they are to transparently account for all receipts and expenses.

“Nyanopan” is a charitable organisation in Nepal that supports the sustainability of underprivileged people, blind, disadvantaged pregnant women, extremely poor, and most recently covid affected victims. It is headed by an influential personality of Nepal Vijay Lama, a renowned Airbus Captain known for his safety records, and a patriotic philanthropist who himself caught covid and now fights for people affected by covid having been through this journey before.

Finally, the idea of charity and the world record attempt was finalized by the team. After many rounds of meetings and discussions, the team proposed to invite 1,500 people on Zoom to eat Mo: Mo: at the same time. The team then created a group on Facebook, “momo world record”, and started to invite their friends. People who had joined the group invited their friends, and new members invited further friends. Seeing merit in the cause, various celebrities of Nepal joined the campaign. The Nepalese celebrities supporting the campaign comprise achievers in the sports, music, arts, and entertainment sectors. Furthermore, an Australian international soccer player Mustafa Amini also joined the event for the love of the campaign, Mo: Mo:, Nepal and Nepalese people.

A press release of the event was held at Everest Momo Australia at Westmead, Sydney on 15th May where organisers and sponsors debriefed the attendees about the event. A common voice that articulated was – we can create a positive impact on someone’s life living thousands of miles away living in our own room.  If we truly want to help others, we can try, and small help from every one of us becomes collectively big. The ambiance definitely ignited the value of social service and giving back to society which we tend to overlook with our day-to-day struggles and routine challenges.

When initially planning the event, India had devastating effects of Covid 19’s second wave. The team knew Covid would enter Nepal too as India and Nepal share the common border. This was one of the predominant reasons, they pre-emptively thought to collect funds for the event via sponsorship from business houses and the public as mentioned previously.

To date, the organising team although a very small one consisting of only 3 individuals has collected more than AUD$13,000, and several people representing various walks of life have confirmed that they like the idea of the event and will further support it via participation on May 29 (Nepal Standard time 4 p.m.) and offer gratuitous donations. The Facebook group has more than 5,000 supporters and more than 1,000 people have enrolled in Zoom. Let us hope the event achieves what it aims for and encourages other people to organise such events to help humanity in crisis. A simple question on Facebook can create a positive impact on someone’s life living thousands of miles away!

Santosh Adhikari and Pramod Rimal are the Directors of Everest Mo:Mo:, Australia, the platinum sponsor of the campaign. Santosh is helping to connect with local media and authorities and Pramod is supporting to make ‘Nyanopan’ websites and other technical stuffs. They are making impressive efforts to raise funds to provide financial assistances to the Covid victims in Nepal.