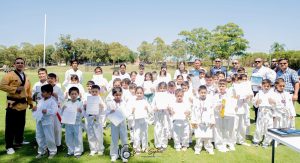 Sydney, Warriors Taekwondo Martial Arts & Fitness and United Taekwondo Federation (UTF) brought together the Second Taekwondo Championship and Kids Fitness Challenge 2020. Originally the event was scheduled to take place on 28 March but in the face of COVID-19 pandemic, it was organised on 27 December.

In the championship organised in Olds Parks Penshurst observing the Australian government’s public health orders and restrictions to control the COVID-19 spread, out of 70 participants, 42 received trophies, medals, and certificates.  Alongside community awards, ‘Fittest Award’ was conferred upon each of two young participants Sebastian Scalici & Jason Gurung.

The Significance of the Event

The director of Warriors Taekwondo and Martial Arts Fitness Prakash Chhetri shared with NepaleseAustralia, “We have organised the championship to attract the Sydney-based Nepalese community to this sport of distinction and promote the much-loved sport in our community. There were participants from outside NSW as well. People have natural desire to distinguish themselves in sports even living beyond national border.”

The reputed Taekwondo master Chhetri, who has been making remarkably positive and encouraging contributions to promote this game, further observed, “We have been organising this championship every year with the reliable cooperation of the stakeholders. We would like to thank the generous sponsors Sapphire Estate Agents, Wish Real Estates, Handy Nepal, CoffeeDrop Café and Namaste Curry House.”

In the program, Binod Paudel, the old sportsman and key motivator who has been closely associated with this game since childhood and who has been contributing to the development of the sport was awarded with the honorary black belt by the Warriors Taekwondo board member the Lebanese-born Australian grand master Bilal Jamil Elmowy (9th Dan Black belt), and master Prakash Chettri.

Opportunity and Attraction for Community

Senior sports personality Dev Gurung shared after the event, “Sport is the language that unites us all. I am overwhelmed to watch the budding talents displaytheir prospective performances. This is a good sign of positive and competitive spirit which we always yearn to see for our children to grow with.The organizer’sefforts to create the appropriate and kids-orientedplatforms to sharpen their budding talents should be fairlyacknowledged.”

Admired sportsman Bhim Basnet shared, “We should explore ourkids’ area of interest and abilities in their drive towards success.The result is less important ascompared with the earnest efforts and impressive performances the kidshave put in to show their natural development.”